Putting the 'tic' in 'critic' | underscore__
« Announcement: The Recs Newsletter Is Back Corbyn, Glamour, and the Working-Class Dandy »

Just to while away the time, I’ve been trying to list what my – and I suspect many others’ – writing tics are, especially when writing theory/criticism. (The tics I’ve identified below I know for a fact I have obtained through reading Anglosphere theory/criticism/philosophy, so it can’t just be me afflicted by them.) I’ll explain more below, but this isn’t to mock or shame people: there would be no language without repeated turns of phrase (tics), and we all have them. I’m just interested to see what happens when we elevate them from unconscious reflexes to the level of conscious reflection.

Here’s some I’ve identified, in both myself and others, off the top of my head:

It’s interesting: where do you stop when listing writing tics? Because I could easily extend the above list: I could have included particular sentence structures (something which the “Far from…” tic hints towards), particular ways of opening or introducing pieces, particular neologisms or words, particular topics, particular citations, particular uses of punctuation, particular likes and dislikes, etc, etc…

The answer is that, well, you can’t: writing is, by nature, a kind of tic. Or, more generally: language is a kind of tic. Instead of being the perfect representation of an individual self-consciousness, language is by definition adopted through a cumulative imitation of external speakers, which we then interiorise and eventually use automatically. Rather than a (self-)conscious, linguistically coherent thought occurring before every act of speaking/writing, language is simultaneously more than and less than the subject. More than because language always comes from, and is directed towards, the external Other; less than because its use is determined primarily by pragmatics and unconscious reflexes, rather than being grounded in a self-conscious intention prior to language. In other words, language lacks an interior; it exists purely on the outside, for the outside; and it is for this reason that William Burroughs famously described language as a virus.

Tics, then, emerge as acute examples of how language spreads as a kind of viral infection. We pick them up from someone else, when reading them a particular extra-linguistic effect/affect is produced in us, which (perhaps with a level of repetition) then leads us to use them ourselves, which someone else then reads, causing the tic-virus to begin another cycle of replication, and so on. And this cyclical replication is how all the elements of language spread: hence the inherent repetitiveness, or tic-like nature, of language. 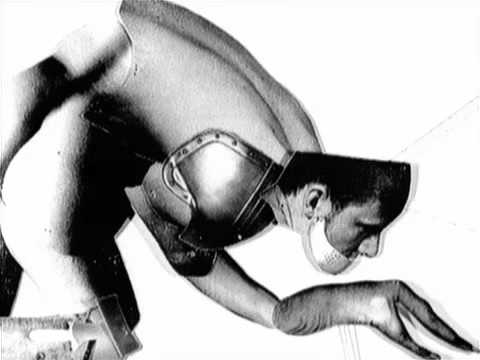 I am reading Samuel Beckett’s absolutely superb The Unnameable at the moment, which is precisely oriented around this absent interior of language, and all the paradoxes that brings. Aware of the overbearing gaze of what it takes to calling the “master” – something akin to the (language) police – Beckett’s unnamed narrative voice is constantly trying to dodge any attempts to linguistically pin it down. It switches its pronouns at whim (sometimes describing itself with “I”, other times with “he”), it constantly contradicts itself, and confuses the meaning of interrogative words like “what”, “where” and “when”, as demonstrated by the opening lines of the book:

Where now? Who now? When now? Unquestioning. I, say I. Unbelieving. Questions, hypotheses, call them that. Keep going, going on, call that going, call that on.

This explains the supreme difficulty of the prose in The Unnameable – because it is essentially written in another language. Not a language that is codified and institutionalised, e.g. German or Mandarin, though – for then the difficulty would merely be technical; we could just hit the dictionaries, go to classes, visit the country etc – but instead a precisely uncodified, mutated form of language that exists at the fringes of such a dominant institutionalised language. This kind of language is what Deleuze and Guattari call “minor literature” (in opposition to “major literature” or “major language” such as codified German or Mandarin). In this minor literature, words are no longer signifiers rigidly chained to a signified: the word “I” no longer means what we think it means, nor “where”, nor “going”, etc. We take elements from the “major” language and detach them from their usual chain of meanings. Because such a minor literature undoes the rigidities of establish, codified language, they are usually demonised and punished, and can only be seen negatively as “mistakes” (as in the case of a teacher marking down a pupil for bringing, for example, spoken local slang into a written piece of work).

Beckett thus brings a political dimension to the notion that language is a virus that perhaps Burroughs misses (I haven’t read him, and purely working off the surface-level notion of “language being a virus” here, full disclaimers etc.). The notion of language being a virus suggests an indiscriminate spread without a helmsman, purely determined by parameters such as proximity and immune system strength. But Beckett reminds of the injunction, the element of force, behind the spread of language, that works to continually create a dominant language and then a “minor” or suppressed language(s) of the dominated (Deleuze and Guattari’s “minor literature”). There is always a preference for one way of speaking/writing over another, a preference which structures and contours the extra-linguistic field that the language-virus replicates on or through.

Working in a primary school for the past year, I’ve been reminded of this element of force: we forget that in order to become the language-using subjects we are today, we literally had to go through years and years of the education system, teachers and parents telling us right from wrong, correcting us, and so on. And this forgetting is crucial to language-use – if we all constantly thought before speaking/writing “these aren’t really my words/thoughts, I am not actually expressing my ‘self’ here”, then the spread of language would drastically reduce in speed, perhaps almost to a halt – which would then eventually kill off the language virus altogether.

There is no getting rid of tics, then, no ridding our language of repetition or virality. But as Beckett shows, perhaps what we can do is think more carefully about how we repeat in language-use. Repeating words/phrases, but not so much to induce automatic recognition, but instead to effect a difference, a decoupling from their dominant meaning, a construction of a “minor literature” that exposes the politics of language. It is perhaps in this light that we can read the vaguely optimistic last words of The Unnameable: “Where I am, I don’t know, I’ll never know, in the silence you don’t know, you must go on, I can’t go on, I’ll go on.”